skip to main | skip to sidebar


Sorry that I haven't updated in quite some time...just not on my major priority list of things to do. (and the pay just isn't what it used to be...)

I am looking at perhaps a new way of doing things, so if you can bear with me for a short time, I will do my best to get some new stuff up here. 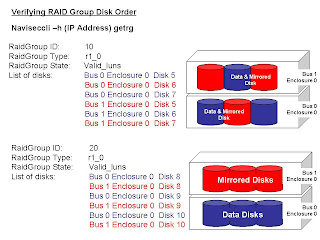 Verifying RAID Group Disk Order
The examples above are from an output of running the get Raid Group command from Navisphere Command Line Interface.

Both RAID Groups are configured as Raid type 1_0.

In an earlier blog we discussed the importance of configuring RAID 1_0 by separating the Data disks and Mirrored Disks across multiple buses and enclosures on the back of the Clariion. This diagram is to show how you could verify if a RAID 1_0 Group is configured correctly or incorrectly.

The GUI will show the disks as the Clariion sees them in the order of the Bus and Enclosure, not the order you have placed the disks in the RAID Group.
Posted by san guy at 9:30 AM 13 comments: 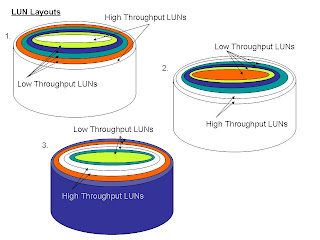 LUN Layout
This diagram shows three different ways in which the same 6 LUNs could be laid out on a RAID Group
In example number 1, the two heavily utilized LUNs have been placed at the beginning and end of the LUNs in the RAID Group, meaning they were the first and last LUNs created on the RAID Group, with lightly utilized LUNs between them. Why this could be a disadvantage to the LUNs, RAID Group, Disks, is that Example 1 would see a much higher rate of Seek Distances at the Disk Level. With a higher Seek Distance rate, comes greater latency, and longer response times for the data. The head has to travel, on average a greater distance between the two busiest LUNs across the disks.
Example 2 has the two heavily utilized LUNs adjacent to each other at the beginning of the RAID Group. While this is the best case scenario for the two busiest LUNs, it could also result in high Seek Distances at the Disk Level because the head would be traveling between the busiest LUNs and then seeking a great distance on the disk when access is needed to the less needed LUNs.
Example 3 shows the heavily utilized LUNs placed in the center of the RAID Group. The advantage to this configuration is the head of the disk would remain between the two busiest LUNs, and then would have a much shorter seek distance to the less utilized LUNs on the outer and inner edge of disks.
The problem with these types of configurations, is that for the most part, it is too late to configure the LUNs in such a way. However, with the use of LUN Migrations in Navisphere, and enough unallocated Disk Space, this could be accomplished while having the LUNs online to the hosts. You will however see an impact on the performance of these LUNs during this Migration process.
But, if performance is an objective, it could be worth it in the long run to make the changes. When LUNs and RAID Groups are initially configured, we usually don’t know what type of Throughput to expect. After monitoring and using Navisphere Analyzer, we could at a later time, begin to move LUNs with heavier needs off of the same Raid Groups, and onto Raid Groups with LUNs not so heavily accessed.
Posted by san guy at 9:27 AM 22 comments:

Stripe Size of a LUN Setting the Alignment Offset on ESX Server and a (Virtual) Windows Server
To add to the layer of confusion, we must discuss what needs to be done when assigning a LUN to an ESX Server, and then creating the (virtual) disk that will be assigned to the (Virtual) Windows Server.
As stated in the previous blog titled Disk Alignment, we must align the data on the disks before any data is written to the LUN itself. We align the LUN on the ESX Server because of the way in which a Clariion Formats the Disks in the 128 blocks per disk (64 KB Chunk) and the metadata written to the LUN from the ESX Server. Although, it is my understanding that ESX Server v.3.5 takes care of the initial offset setting of 128.
The following are the steps to align a LUN for Linux/ESX Server:
Execute the following steps to align VMFS
1. On service console, execute “fdisk /dev/sd
Now, that the ESX Server has aligned it’s disk, when the cache on the Clariion starts writing data to the disk, it will start writing data to the first block on the second disk, or block number 128. And, because the Clariion formats the disks in 64 KB Chunks, it will write one Chunk of data to a disk.
If we create a (Virtual) Windows Server on the ESX Server, we must take into account that when Windows is assigned a LUN, it will also want to write a signature to the disk. We know that it is a Virtual Machine, but Windows doesn’t know that. It believes it is a real server. So, when Windows grabs the LUN, it will write it’s signature to the disk. See blog titled DISK ALIGNMENT. Again, the problem is that the Windows Signature will take up 63 blocks. Starting at the first block (Block # 128) on the second disk in the RAID Group, the Signature will write halfway across the second disk in the raid group. When Cache begins to write the data out to disk, it will write to the next available block, which is the 64th block on the second disk. In the top illustration, we can see that a 64 KB Data Chunk that is written out to disk as one operation will now span two disks, a Disk Cross. And from here on out for that LUN, we will see a Disk Cross because there was no offset set on the (Virtual) Windows Server.
In the bottom example, we see how the offset was set for the ESX Server, the offset was also set on the (Virtual) Windows Server, and now Cache will write out to a single disk in 64 KB Data Chunks, therefore limiting the number of Disk Crosses.
Again, from the (Virtual) Windows Server we can set the offset for the LUNs using either Diskpart or Diskpar.
To set the alignment using Diskpart, see the earlier Blog titled Setting the Alignment Offset for 2003 Windows Servers(sp1).
To set the alignment using Diskpar:
C:\ diskpar –s 1
Set partition can only be done on a raw drive.
You can use Disk Manager to delete all existing partitions
Are you sure drive 1 is a raw device without any partition? (Y/N) y
----Drive 1 Geometry Information ----
Cylinders = 1174
TracksPerCylinder = 255
SectorsPerTrack = 63
BytesPerSector = 512
DiskSize = 9656478720 (Bytes) = 9209 (MB)
We are going to set the new disk partition.
All data on this drive will be lost. Continue (Y/N) ? Y
Please specify the starting offset (in sectors) : 128
Please specify the partition length (in MB) (Max = 9209) : 5120
Done setting partition
---- New Partition information ----
StatringOffset = 65536
PartitionLength = 5368709120
HiddenSectors = 128
PartitionNumber = 1
PartitionType = 7
As it shows in the bottom illustration from above, the ESX server has set an offset, the (Virtual) Windows Machine has written it’s signature, and has set the offset to start writing data to the first block on the third disk in the Raid Group.
Posted by san guy at 12:02 PM 39 comments: Older Posts Home
Subscribe to: Posts (Atom)
****Any use of the material for publication contained in the blog without written permission or consent is prohibited****